Because I’m The Cup of Your Chai | #part2 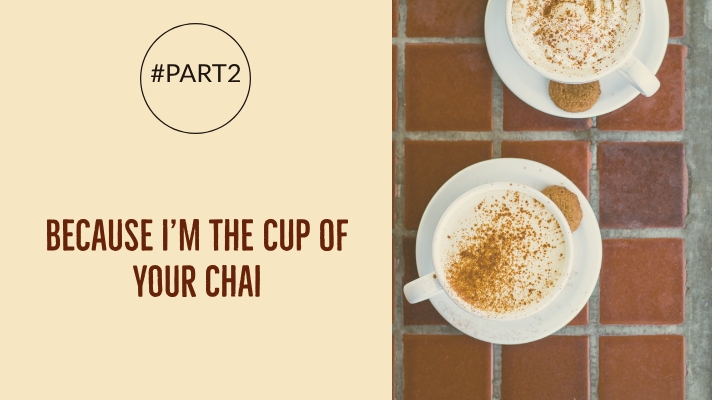 As a woman who struggles with severe depression, the most amazing thing a person can do for you is to just support you and NOT try to fix it. Don’t try to make her exercise. Don’t make her feel bad if she doesn’t accomplish anything in a day. Don’t make her talk about it if she doesn’t want to. Don’t try to force her to be happy. She already feels so badly about herself and all those things. Just be there for her.”

I was in a balcony seat at my new favorite coffee shop when I read these two paragraph in Cosmopolitan magazine. It got me thinking so hard until now. I can’t sleep and it’s almost 5 am now. I feel guilty that I let Aahna down. I am being selfish. And that two paragraphs keep playing over in my mind.

I wonder why didn’t I just text her ‘good morning, have a great day today Aahna’ before, or just a simple ‘Hey I saw someone playing with her hair and it reminds me of you, hope you’re feeling a lot better now’ would mean something. But I didn’t. All I did was keep showing her how much I can’t deal with my insecurities while she is struggling with her own head.

Huh. Guess I’m just being over dramatic by the lack of her text. I forgot that she might have her episode and need space. Oh God, what had I done. I can’t tell that it’s my insecurities. That’s not an excuse.

“Nami, someone is here for you,” he said

“My boss? It’s too early,” I yelled from my pillows and move like a Sloth reaching out to my T-shirt and put it on.

I walk to the front door and find my boss sitting on a bench with a cigarette in his hand.

“Hey, you look horrible. Something wrong?” he asked. I sit next to him.

“Nah, it’s just another sleepless night. What is it, something wrong?”

“I need you to fix this,” he shows me some rejected list and explains something. Ugh, another shit to face. I breathe heavily. Not saying anything. I can’t see clearly. I heard him telling me a lot of things about so many things but sounds like someone is speaking underwater.

Still no words coming out from my mouth. I tried so hard to keep my eyes open. And somehow I hear your voice. Your laugh.

“Nami, did you hear me?” he said. I look at his face, staring into his eyes.

“No, I didn’t and I can’t do that. I’m too tired dealing with this kind of pressure every day. This job has consumed my inner peace you know. I can’t do this anymore. I can’t work the job I hate for the guy I don’t like,” whoa I didn’t know I can say that to this guy. I left the seat, and leave him.

“I quit!” I closed the door and walked straight to my room. Packed my clothes and took a shower

In a couple of minutes, I was already on my way to the airport. Stopped by at a small book store and bought something. Earphone on, playlist had been set, now I’m ready for a five hours flight.

‘Silly little things matter so much!’ they said. That’s all I can think about all the way on the air. Watched all the clouds turns red and purple, then dark. Some turbulence and annoying neighbor in my seat. I can’t sleep, I can’t relax. But I got an extra hour to be here. My watch automatically moves backward an hour an a half right after our plane landed perfectly. So I guess I can rush to the place I really want to visit since last month. It’s not too late. I rush my steps to get out from the arrival gate. I don’t want to waste another minute.

I raise my hand the moment I saw a cab. Half run to reach the driver.

“Good afternoon Uncle, do you know this place?” I show him a text, he nods.

“Take me there,” I walked into his cab.

I can’t really see the view outside this cab because it’s dark. The windows I mean. It used a dark film. So I was a little bit shocked when the driver told me that we arrived. Felt like I just sat for a couple of minutes.

“Did we arrive?” I asked him to make sure I wasn’t being kidnapped. He nods and opens the window and points at a white short building. I put some cash in his shirt pocket and smiled.

“Thanks,” he smiled back.

I look around and notice something familiar like that bunch of banana trees at the side of this building, or the high fences and another building back there. I saw all of this twice or so back then. And I walk to the building. Keep staring at everything I saw and looking for a door with double 8 written on it. I took some stairs until I found this door. A light brown door with something that looks like a small flag on it.

I knocked twice. And I heard footsteps approaching. The door opened.

“Wanna play the puzzle?” I show two pieces of 1000 pieces puzzle on my hands right when someone who opens the door shows up.